Golden Fish Tank is a new pokie, developed by Yggdrasil Gaming. This new pokie will submerse you in a moist tank. It has a cartoony look about it, and the fish are playful looking critters, who seem to be loving life.

Yggdrasil is one of the younger pokie developers. They released their first game in 2013, and have put out consistent impressive games since then. Their strength is definitely the original approach they have to making game. We expect something different and unique from a Yggdrasil game.

We like the gameplay. There are great symbol values in Golden Fish Tank, which ensure that when you do win, it over the wager. We found that this game sustained our bankroll, and if we lost a little, it just meant a big win was on the way, which would get us back to at least where we started.

There are multipliers and additional free spins to be won. We will not go into all the various features on offer, but rest assured there are many of them. If you are a regular pokie player, then you can probably guess what they are, as they are common features. We like that you are rewarded for landing more scatters. There are additional free spins and features picks given for landing more than three scatters. 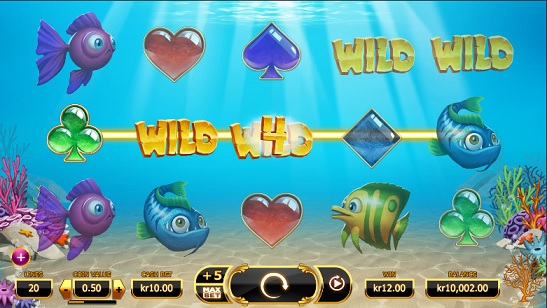 The pokie looks nice enough. It falls short of visual excellence, but that is a tough nut to crack, and we think that Yggdrasil have done well with the design. We like the little details they have included, which give the appearance that the fish are floating. There are subtle but effective animations, which bob all the symbols about. This and the transparent reels work well together and Yggdrasil pulls of the floating thing, which they were going for.

This is a lucrative pokie. The RTP is a respectable 96.4%, and the Jackpot at the highest bet, is 20,000 euros. That is just in the base game, there are multipliers in the base game, which will further the player’s win.

We feel that Yggdrasil could have done a little more with the appearance of this game. It is a little dull, and had they invested a bit more time, maybe another animation or two, then it would be a much nicer looking title. Golden Fish Tank is a little bit skimpy on features.

The free spins game has a lot of features you can take into it but apart from that, there is nothing to break up the base game. The Golden Bet is not an impressive feature. It costs you an extra five coins every spins and all you get is another feature in the free spins game.

It is worth playing, because it is a good game. It is a pretty game, with colourful fish and good vibes. There is big winning potential and the game will hold a bankroll steady. This is not Yggdrasil’s best tile but we still recommend that players give it a chance.