WMS have been pumping out Monopoly pokies. The newest instalment Epic Monopoly II includes reel mechanics, which WMS have used before. They call them colossal reels; we would sooner call them a waste of time. WMS normally develop a good game. Their previous titles, of which there are numerous, have great features and graphic.

Epic Monopoly II has many features. Spinning the bonus wheel triggers all the games features. To unlock the bonus reel, you must land three scatters anywhere on the reels and landing more scatters, will add multipliers onto your wins. We like when landing extra scatters means further rewards. The reels can either win coins or unlock one of the games bonus features. We will go into all the features this can unlock

The Epic Chance Bonus, you choose one of five cards. This bonus feature will either win money, or send you to another bonus feature. Under one of the cards is a win of 25 free spins. The Around the Board Bonus also has ten rolls under one of these cards.

The Around the Board Bonus is themed around the monopoly board game. You roll a dice, to move spaces around the board and landing on property wins you money. You can bet further to build things like house or hotels. Landing on your houses and hotels wins you money. If you like this feature, WMS based a whole game on it, called ‘Once Around Deluxe’

In the free spins mode, landing additional scattered bonuses on either of the reels, will add more free spins. It is a normal free spins game, which is played at the bet that unlocked it. 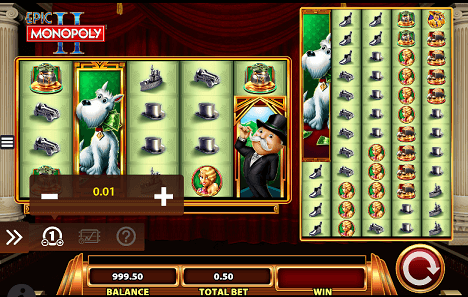 There is quite a lot in this pokie, which we do not like. The colossal reels, add nothing to the gameplay. All they do is make this pokie confusing and ugly.

There are potential massive wins, obscured in its 100 paylines. However, we played this game for a while, and found that all it ever gave were frequent small wins bellow the bet. The symbol values are low and have to be, to compensate for there being so many on the reels. We are not huge fans of the colossal reels.

We do not like how they have themed the pokie. It does not seem like WMS have put any time or thought into the design. The background image is a red curtain on a stage, which we could not associate with monopoly. The games controls are mediocre looking and the symbols do not look good either. The gameplay is slow because you wait for ten reels to spin.

We do not think it is worth playing. WMS have released a range of monopoly games, trying to cash in on the board games, popularity. You would think they would have got the hang of it, by now. But this title is not good. It is ugly, and the colossal reels do nothing for it.

There are some ok features. If you are willing to look past this game’s faults, you can try enjoying them. We would recommend playing another one of WMS’s game that also offers the same features, without be slow and ugly.