Sneak Peak At Zoom By Thunderkick

Thunderkick has released another new video pokie game on the market that proudly wears the company logo and trademark. By this we’re not just talking about the name of the company when the pokie starts, but the game design, bonus features and game theme, presented in a totally original and a little crazy way.

Zoom is a Thunderkick pokie that gives out a nostalgic feeling as the game symbols are a great collection of the vintage classic pokie symbols like bells, sevens, cherries, grapes, lemons, melons, stars and the wild. It’s very strange to see vintage symbols like this in a brand new and modern video pokie game.

Another unusual fact about this game is that there are 6 reels and 4 rows in total on the screen, which form the 64 active pay lines. The bet levels may be the only standard detail in this game, starting with $0.10 and ending with $100 per spin.

The oddities continue as we look for the bonus features in Zoom, only to find out that the game has no standard bonus rounds installed. Usually Thunderkick has some great bonus features in all of their pokie games, so Zoom may be the first one that is out of this general rule. In this game big payouts are formed by grouping symbols on the reels.

The entire grid is made of 6 separate sections, each one with 4 positions. In each section a Zoom symbol can land during a spin and transforms the section to one identical Massive symbol and a re-spin is awarded. A consequent Zoom symbol in another section does the same thing and the re-spins continue for as long as Zoom symbols land in the re-spins. 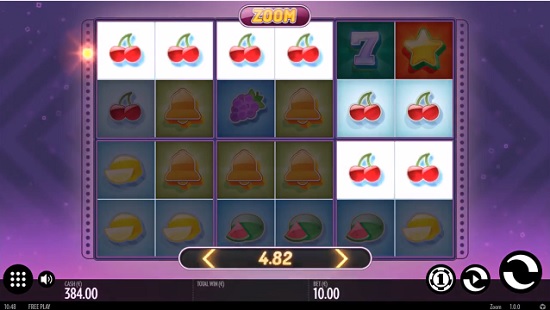 Well if you like out of the ordinary pokie games, Zoom is the right game for you. We love the choice of vintage game symbols and it’s great to see those Stars land of a huge portion of the reels.

We also like the Super Massive symbol, which covers 4 sections of the reels, activated once 4 Zoom symbols land on each neighboring section. This is basically the payout potential of the game as you can get a full screen of identical symbols in one spin.

The only remark we have about this game is that there is no classic bonus feature installed. The overall game play and bonus features with Massive symbols are interesting, but a classic free spins bonus, maybe with extra wilds added, would make Zoom much more exciting and attractive to players.

You have to admire the level of originality the designers at Thunderkick have. Zoom is like no other video pokie game we’ve seen before, with an original game play and bonus features.

To be a fan of the Thunderkick pokie games you need to have a very specific taste in pokies and to want something new, away from the usual pokies offer. Zoom offers players exactly that, but also offers the chance to land some great payouts on the reels, even up to 800 x total bet in a single spin.