Sneak Peak At When Pigs Fly Pokie By NetEnt

July 21st will mark the day when another great video pokie game coming from Net Entertainment will be available for real play across all platforms and across all NetEnt casinos in the industry.

When Pigs Fly is a cartoon themed pokie game with many interesting and funny animations, accompanied with high level details and a funny, futuristic, background music. Even though When Pigs Fly is very attractive at first sight and seems enjoyable to play, underneath the surface is a mid to high variance pokie game, based on the identical design of Reel Rush.

If you ever had the chance to play this game for real you know that big payouts can land fast, but also big losses can happen in minutes. The lack of interesting symbols and animations are the main reason why many players didn’t find Reel Rush interesting, so When Pigs Fly is the perfect improved version.

The game play is fast and funny, thanks to the pig astronaut symbol waiting patiently for the green light to take his place in the space rocket and hit that launch button. With bets starting from $0.50 up to $100 per spin and a maximum of 3,125 ways to win, When Pigs Fly is not a game to be taken lightly.

The potentially big payouts can happen only in the free spins bonus, where the player is awarded with 8 free spins, played on the maximum 3,125 ways to win over the full 5×5 grid. Since no scatter or bonus symbols can be found in the pay table, the bonus is triggered by landing 5 consecutive wins on the reels.

Each win will increase the staring 45 ways to win to the maximum, by unlocking an additional row on the reels with each connected win. When in the bonus round, the most desired symbol to land on the reels is the wild, because it can land in decent numbers and cover several positions on several reels. 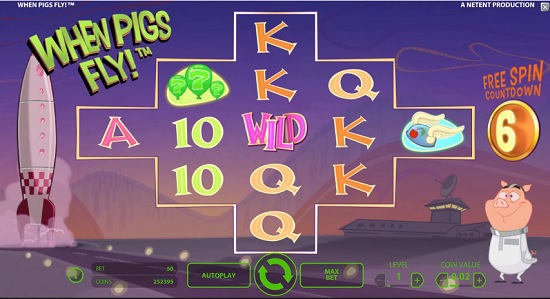 Even the most pessimistic players will have to agree that NetEnt once again did a great job, combining the big payout potential from Reel Rush and implementing a funny and interesting game theme and animations. This is why When Pigs Fly is sure to gain a lot of popularity once it is released live across the NetEnt platform.

For now we have no reason to object to any details of When Pigs Fly. Once we have a closer look at the pay table and game rules we can add our impressions.

If NetEnt stayed original to the overall Reel Rush design, including the variance, then yes, When Pigs Fly is definitely a game worth playing.

Thanks to the visual improvements base play won’t get boring after longer sessions and the big number of ways to win in the bonus round is sure to bring many excitements to the reels.

The maximum promoted payout is the same at 480,000 coins, but maybe we can hope for an even higher variance than on its predecessor and bigger payouts than any we’ve seen before on Reel Rush. We will know more When Pigs Fly goes live on July 21st, 2016.