In a very short time ranging no more than a month or so, Yggdrasil Gaming managed to launch several new video pokie games on the market, substantially increasing their games offer to online players.

This is always greeted with approval over the community, as Yggdrasil has some really great video pokie games in their offer and they became a top choice for many online casino players. We had a chance to see another new Yggdrasil video pokie game go live recently, by the name of Legend of the White Snake Lady.

If you are an experienced player in online casinos, you will know from the instant you see the game name that this pokie has an oriental theme attached, most probably some ancient Chinese legend.

You wouldn’t be wrong in any way as Legend of the White Snake Lady is one of the most popular legends in Chinese folklore. It’s no surprise to see that the designers from Yggdrasil Gaming went with a theme choice like this one, since they already launched a similarly themed pokie a couple of months ago.
The game theme is perfectly presented on the reels of the game, with a great deal of attention paid to even the smallest details. The game play is placed between two snake statues and the background is set against a dark night on a mountain, so spinning the reels is mystic every step of the way.

The symbols are the main characters from the legend, oriented around the central one, the White Snake Lady. The symbol details, animations used, the overall visual design of the reels and the background sounds as you spin the reels are perfectly aligned and on the highest quality level. 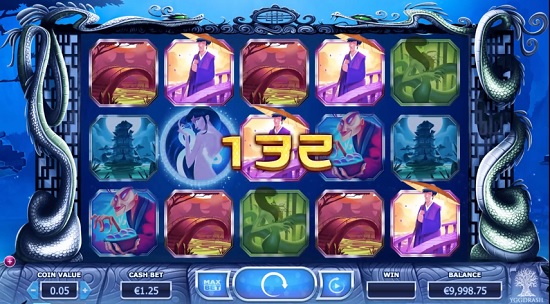 As we said we love the visual effects that are used in Legend of the White Snake Lady pokie game. You have to give credit to the designers who put much effort into making this pokie game look so great.

This is the detail that will attract you to this game at first sight. We also like the fact that 5 of a kind combinations give a 100 x total bet payout and that player can win up to 1,000 x total bet in a single spin.

What we don’t like in this game is that the symbols have very small payouts for anything under a 5 of a kind win. When we say small we mean top 4 of a kind win is 10 x total bet, with the highest paying White Snake Lady symbol, while the rest have a 6 x total bet 4 of a kind payout. There is no bonus feature in place, which the game desperately needs and no decent functions added to the wild symbol.

We had one session with Legend of the White Snake Lady and we don’t think it will be repeated in the future. The low payouts for under 5 of a kind wins are devastating to the bankroll and after 200 spins plus we didn’t manage to get any 5 of a kind wins. The wild symbol rarely forms decent payouts and we never got more than one wild on the central reel.