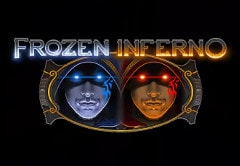 Williams Interactive has released one of their best pokie games so far, Frozen Inferno. What makes this game so great is the high level of visual effects, transition between game modes and the coalition of both mode features in one during the bonus round.

Frozen Inferno features a standard design of 40 fixed pay lines, that go over 5 reels and 4 rows, but that’s pretty much all that is standard on the reels. The bet levels are decent starting with $0.40 and can go up to $200 per spin.

The game play is very interesting and unique, as you can choose between two game modes to play. Each mode comes with a different set of colors, as the frozen mode is mostly in white and blue while the inferno mode is dominantly in red color.

The main difference between the two modes is the function of the wild symbols. As expected the frozen mode has an ice wild which is sticky and stays in position during the free spins, while the inferno mode has the fire wild that moves around the reels like a burning flame.

The game features are very interesting and can be very rewarding, considering that Frozen Inferno is a high variance video pokie game coming from Williams Interactive.

As we said before, we really like the symbols in Frozen Inferno. The level of details is outstanding and you are instantly attracted to that world of mystic and magic on the reels. We also like the fact that the symbol color and appearance change with each mode, so you get a feeling like you are playing a separate game in one.

The different functions of the wilds in each mode are also interesting, as you can choose which one you prefer more. We also love the way the bonus feature is triggered. A wild symbol is added on the reels from the very first spin and the extra wilds that land after stay in place, up to a maximum of four wilds.

Since you need to land a bonus symbol to trigger the free spins, you can already have some great wins with the four wilds on the reels. 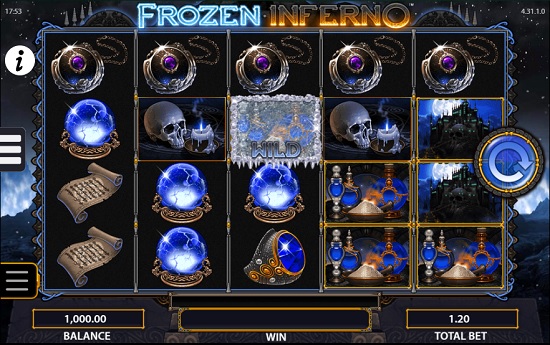 The bonus feature is also great, thanks to the changing game mode on the reels with each passing win. We love the fact that you can win up to 8 ice or fire symbols altogether in one bonus round. So many wilds on the reels are a sure recipe for a big payout in Frozen Inferno.

We like pretty much everything about Frozen Inferno, but we think that the number of sure wins in the bonus round could be a bit bigger.

Only 5 guaranteed wins seem little and you will need a lot of luck to get a big number of wilds on the screen in order to get one or two big wins and a great payout.

In our opinion Frozen Inferno is definitely worth playing as you have the chance to win big. It’s a high variance game, where you have a chance to score big thanks to the big number of wilds during base play and the free spins bonus.

It’s only a matter of luck and persistence when Frozen Inferno will pay big, so you just need to hit it hard with real money spins.