We can’t say that we have a lot of experience when it comes to the video pokie games collection from Rabcat Gaming. They are a small company and to be honest we are sure many players don’t know they even exist.  You might have played some of their games in Microgaming casinos, as they operate under the Quickfire platform, but in general they don’t have a big variety of video pokie games and in return not too many players can be called regular Rabcat customers.

One game that we did like from this provider was Castle Builder as it was an ingenious mix between a pokie game and a multilevel building game. Still the payouts were low so it didn’t manage to get on our regular games to play list. Frozen Diamonds is the second video pokie game from this provider that is attractive for us in several ways.

We have to say that we do love the top level animations and graphics that were used on the reels of Frozen Diamonds. The visual appearance of the game will blow you away as each segment of the game, down to the smallest detail, is on a top visual level. You can’t find many other pokies around the industry on this visual level, so we have to congratulate the designer team at Rabcat.

A very clever solution was implemented in the overall game design, by implementing the Free Falls feature. This detail is attractive to most online gamblers, as it is used on many premium games on the market and is often associated with big payouts. In Frozen Diamonds it only serves as an illusion for big wins to land as the weak pay table doesn’t allow for that to happen.

Still we love the fact that Frozen Diamonds has a free spins feature and that it is triggered after only 3 consecutive wins. The extra wild symbols on the reels only increase your chances of triggering the free spins. 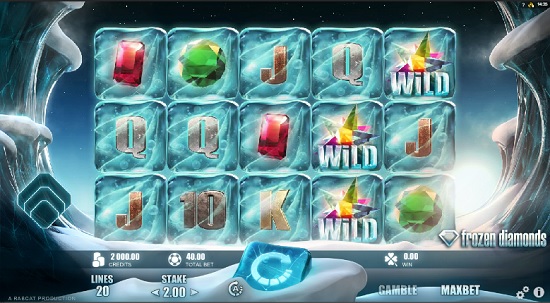 Even though the payouts in winning spins during the bonus round are small, the Free Falls design allows for more than one win to land in each free spin and you can even win extra free spins with a doubled payout after each third consecutive win. All of the payouts during the bonus round add up little by little and in the end you can get anywhere from x20 to x70 total bet payout overall.

The symbols payout is weak and we would like to see bigger payouts for the top 5 of a kind combinations. But on the other hand it might increase the game variance to medium, resulting in less frequent feature triggers.

Yes, Frozen Diamonds is probably the first video pokie game from Rabcat Gaming that we can recommend for real play. It may not seem like much from looking at what the game offers, but with some luck in real play mode, your balance can be increased quite decently over a short period of play. Any video pokie game that can increase your bankroll for 100 x total bet, in 50 spins and with a minimum loss, is a pokie game worth playing.