Euro Golden Cup is the latest football theme video pokie game, launched by Genesis Gaming just in time for the main event of the year, Euro Cup 2016 Paris, France. With each mayor football event in the world the online gambling industry is instantly increased with a few new video pokie games promoting the world favorite sport.

If you take into consideration the fact that the main world football events, World and European Championship, are almost two years apart, it gives the developers enough time to really put an effort into creating a great football pokie. Still each time it’s the same old story, with football pokies created and launched only a few months before such an event.

This is why there isn’t a single football pokie in the industry worthy to carry the name the greatest football pokie game of all times. We expected something more from Genesis with this release, but instead got a simple, low level pokie game which seems more like some ancient football arcade.

The bonus features in the game are worth mentioning, because the choice is interesting, with several levels each awarding an extra feature and enhancing the previous one. The free spins bonus round in Euro Golden Cup consists of the Play Maker, Striker and Penalty Shoot Out features each on one of the corresponding 3 levels.

The progress from level to level is made possible by collecting trophies during base play and you need a total number of 30 to get all available features. The Playmaker awards 10-15 free spins with Stacked Sliding Wilds, Striker awards 10 free spins with random Target symbols/wilds and the last is a standard penalty game with cash prizes and potential multipliers. 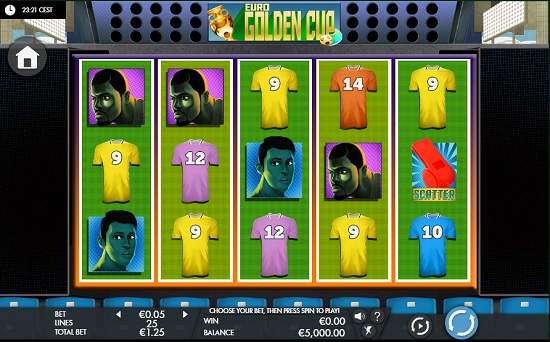 Everything these days is in the spirit of football, so the game theme is one of the few details that we like. The bonus rounds are also interesting with the chance for increased payouts thanks to the added wild functions in the Play Maker and Striker Free spins.

You would have to be at the age of 10 and a big fan of arcades in order to be attracted to the symbols and overall visual appearance of Euro Golden Cup.

Very low level animations, supplemented by equally low paying symbols. The levels advancement is very slow and the 30 needed trophies to unlock the full set of features seem like a very big number.

Euro Golden Cup is a low to mid variance game, with not so attractive appearance, low paying symbols and hard to unlock bonus features. Base play is quite brutal awarding very small wins, which in return drains your balance fairly quickly.

The flag symbols on reels 2 and 5 don’t land as often as we expected they would, which makes the road to unlocking the penalty shoot out very long and painful. Even with all features unlocked the payouts are rarely over 100 x bet and can hardly compensate your loses. With all this said we can’t see why we would recommend Euro Golden Cup for real play.