Rival Gaming developed Frogged. They are an experienced game developer. Founded in 2005, the company has a decade of experience, in which they released 205 casino games. The newest title to swell their ranks is called Frogged. It is themed on 1980’s classic arcade game Frogger, which was all kinds of 8bit fun.

We like that Rival Gaming have used graphics that look like they came straight out of the 1980s. Maybe this wasn’t intentional and they are just hiding behind the theme. It really does not matter because this game looks authentic. They have gone above and beyond with the theme from the 8bit graphics to the road reels, this pokie has captured the essence of Frogger.

We want to talk about the frog feature, because it is a prime example of how well this game is themed. The frog symbol, acts as an expanding wild. When it lands on the reel, it will hop up the reels and substitute symbols to make wins. The clever part is that it only hops up the rows, as if it was crossing the road. It does so with a nice animation and deposits lily pad wilds, as it goes. We think this is a clever little tribute to the game.

There are quite a few feature. The free spins game is triggered by landing three or more scatters anywhere on the reels, just like every other free spins game. It has identical gameplay to the base game, but there is a slight design change. 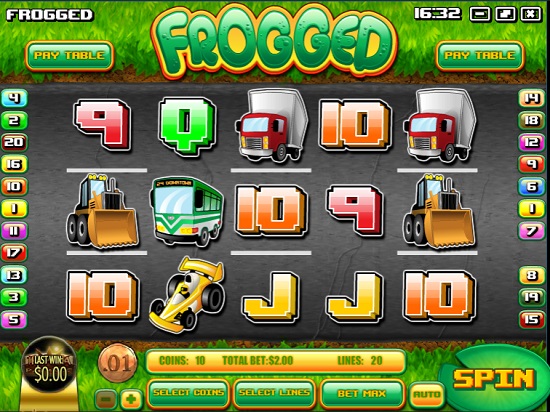 All of the game controls are taken away, and the game zooms out, so you can see the vintage arcade monitor you are playing on. The one difference in the free spins game is that if you land another three scatters, which look like bulldozers by the way, you are taken to the River Rapid bonus mode.

The River Rapid bonus mode is another obstacle the frog must pass on his journey home. The symbols change to reflect the river, which the frog is now crossing and there is a 2x multiplier for all expanding frog wilds. The bonus game has the fly symbol, which is the frog’s favourite treat. The fly is a sticky wild, which will hang around for an extra spin after it lands, and applies a 2x multiplier to any win it might make. If you spin the reels and land another fly then they will both stay.

We like the winning potential in the game. It is worth 1000x stake if the player lands five alligator symbols, in a line. In a game with multiplying sticky wilds, this makes for big wins. There is potential $100,000 in the game, and that is not the biggest win.

We think that the free spins feature is not that good. It is identical to the base game and it is likely that you will use all your free spins without winning. It is the only way to unlock the River Rapid feature, which does not happen very often.

We also found this game had medium, low variance. We lost a bit of money playing it and maybe it was just luck but we found that wins were infrequent and below the wager.

Frogged is worth playing because it is a fun little tribute game. It is well designed and has some great features. This game struggles to hold a bankroll steady, and unless you are very lucky, you will probably lose more than you win. However, it is still a fun little game, which we recommend to players interested in more than just their bankroll.