Playtech the self-proclaimed” world’s largest gambling software and services supplier” released a pokies game based on the 80s classic Top Gun. You all remember the movie which defined a generation, well it is hard not to like a game, based on an absolute cracker of a film. It is a great game. Playtech are renowned for their simplistic games, with exceptional graphics and animations, and this pokies ticks all these boxes.

The game has been released, on both desktop and mobile platform simultaneously. Playtech chief operating officer Shimon Akad commented. “This iconic movie was the ideal choice for a premium branded game and is sure to be a hit for all our casino licensees and their players across all channels and devices, delivering, as we do with every title and every product, the ultimate gaming experience.”

The official release date of the game was November 10th 2015. Top Gun will celebrate its 30th anniversary in 2016, and Playtech will be looking to cash in on the hype, of a planned sequel with Tom Cruise at the helm.

The game feels the need for speed, with exceptional animations, in which a fighter jet shoots missiles at the reels adding wilds, the Top Gun symbol. The Danger Zone mode, is impossible not to sing along to and a great addition to game play. The mode is activated by getting three jet symbols on reels 1,3 and 5. The player is then awarded 8 free spins during which an F-14 flies onto the screen and shoots the reels, awarding wilds.

There are 243 ways to win, which not only increases the players chances of leaving a round with some credits, but simplifies the game. Matching symbols, only need to be adjacent to one another and the player will win something. This takes all the guess work, out of what’s a wining line and what is not. 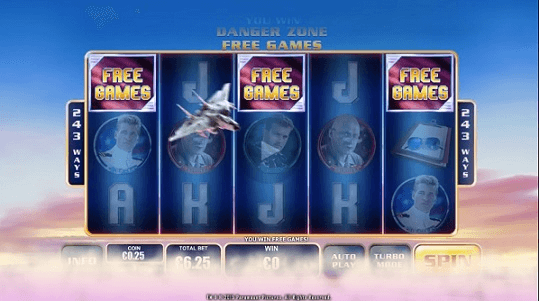 Playtech must have paid a small fortune for the rights to make this pokies, but they made the most of them. The game features original footage from the movie and play the pokies long enough and you will learn all the quotes, if you do not know them all ready. Quoting Top Gun makes you a better person, both in life and at parties.

The games’ biggest down fall, depending on what you like from your pokies, is the jackpot. The biggest pay out the game offers is a £1000, which is not exactly life changing. In moments of honesty, we admit that it is the possibility of a big win, which keeps us coming back to the pokies time and time again.

Not having a large jackpot, might be a shortcoming for this game but it makes up for it, with a lot of small wins. Pokies games with large jackpots, will often empty a players coffer in pursuit of the big win. This pokies offer so many little wins, that it stretches a player’s bankroll.

The bonus rounds more or less guarantee a win and they happen quite regularly. So it really comes down to, what a player is looking for, from their online pokies experience. If chasing the million dollar dream, then take your bets elsewhere, but if a player can enjoy themselves with a steady stream of little wins and exceptional graphics, based on a phenomenal movie, then this pokies could very well be what you are looking for.