Tiki Paradise is inspired by Polynesian culture. When the Polynesian people left South East Asia somewhere between 1000 – 3000 BC, we wonder is they knew that they were embarking on a journey, which would cross the Pacific Ocean, spreading a culture from New Zealand to Hawaii. They definitely were not aware that they would inspire Playtech to make a video pokie. The experienced pokie developer is tackling this theme

We like that this pokie has dug a little deeper into the Polynesian theme. We do not expect for our pokie developers to be anthropologists, but the pokie industry is content, throwing together Polynesian themes by chucking totems in grass skirts.

Playtech has themed this one around their seafaring ways, by using a lot of wood and rope. It also has a bit of a dark and mysterious vibe. It is a well-designed pokie, granted all we have seen is a few seconds of footage on a YouTube video, but it was enough. The graphics are polished and there is a great wiggling rope animation for when you make payline. Speaking of paylines, there are twenty of them in the game.

We worked that out by counting the boxes, because Playtech is being that secretive, with this pokie. Twenty paylines is quite good for a 5×3 pokie, and assuming some decent symbol values this should have some quality gameplay. These are all just assumptions, and we will have to wait until closer to the release to get a feel for how this game is going to turn out. 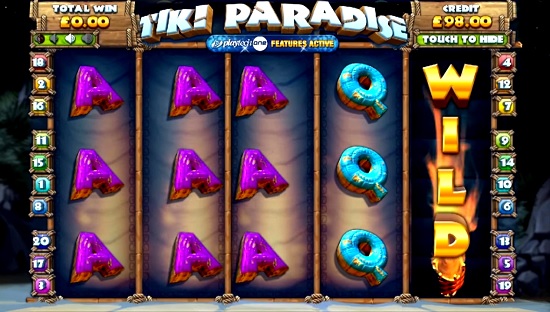 This mentioned few seconds of a Youtube video also showed us an interesting feature. It is called the Win Shuffle. It was triggered in the video when three wilds landed on the middle reel. These must be stacked wilds, which is another little clue about the game. When the feature was activated all the symbols swapped around, in an impressive bit of animation, and it all resulted in a big win.

This is an intriguing feature, and we can’t wait to see how it works. There will probably be a free spins feature, or another in game feature, because it is Playtech and that is what it expected of them. All of their recent games have had free spins features, and we see no reason this pokie would be any different. However, this is pure speculation; listen at your own peril.

It is too early not to like something. We need to at least play a game, before we start disliking it. We won’t like it if the symbol values are low, with twenty paylines a game need some value in its winning, to keep your balance rolling.

We are going to play this game, or at least give it a try, and we advise you do the same. It looks good, and a reputable developer makes it. There is also that Win Shuffle feature, which looks like an original feature, in a time where they are so hard to come across. We expect a good game from Playtech and we will give this title the benefit of the doubt.