Yes, the very same Flintstones that were animated onto screens in the 1960. They are now the theme for a new pokie, developed by Playtech. Playtech have been very busy this year and have a lot of release in the pipeline.This is no surprise considering that the company has released over 400 games since they were founded 1999. They were one of the first companies to develop games online, and helped carved out the industry which today is worth billions of dollars.

We like that Playtech does not rest on their laurels. They continue to innovate and compete with all the new comers, by delivering a game that is superb in respect to gameplay and aesthetics.

We like that they’ve thrown some belief and resources behind this pokie and made the most of this theme. This all starts by purchasing the rights to use a theme, and that is exactly what they have done. They have not wasted the money or the opportunity and have saturated this pokie in Flintstones. Everything from Fred’s bowling hobby to the family’s dinosaur vacuum cleaner and incorporated into this pokie.

The game has a natural bright and colorful look about it. The background image has a bright blue sky and unnatural green grass. A wooden border frames the reels and a rope ties the corners together. It is a well designed, clean and tidy pokie, with a great use of space and color. The iconic stone house is also included and it sits behind the reels on the right of the pokie.

While higher value symbols can take the space of two symbols, this is basically a 5×4 pokie machine with an enormous 1024 ways you can win. It is an easy game to play and with this, many paylines it is clear what is and is not a win. 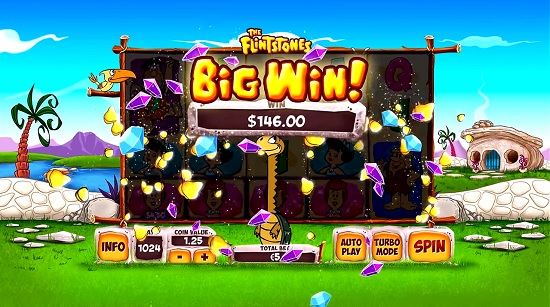 Although we haven’t tried the game yet, we expect frequent wins due to the amount of paylines. What will really determine the gameplay is the symbol values. If the game has high value symbols we expect it will float a bankroll, but it is impossible to tell until closer to the release.

The game has a lot of different features. Although the details have not been revealed, we anticipate a special feature where Fred bowls. You can place a bet for him to play, and you win when he manages to knock down the pins. There is also a thoughtful clever free spins feature. In this bonus feature, you see Wilma with her wild-shooting dinosaur vacuum.

There is another bonus, but this remains even more of a mystery. It seems to involve characters driving around the reels with clouds floating around them. All we can do for now is wait in a sea of suspense.

A fair judgment is difficult to pass considering that the game isn’t yet out, and we haven’t played it. We worry about the value of the symbols. In our experience games with this, many paylines compensate by lowering symbol values, resulting in smaller wins below the wager and an unstable bankroll. There is no saying is this pokie will spiral down this unfortunate path, but we hope it does not.

Is This Game Worth Playing?

Again, answering this will need a bit – or a lot – of dishonesty, as we haven’t played the game yet. But hey, it’s the Flintstones created by one of the best developers, how bad can it be? We are going to play it and advise you to do the same.