Age of Gods is a new pokie themed around the goings on of Mt Olympus, and the twelve Greek God that rule over the mountain. It is the first title promised in a series of seven. Our understanding of it is that Playtech are developing games with a similar theme and gameplay, while changing up the main god, it is themed after. This title is all about Zeus, the leader of the gods.

First impressions count, and we were blown away by our first impression, of this game. Age of Gods has a striking red and blue background. The two colours clash where the light blue sky meets the vibrant red mountains. We are not sure how this fits into the theme, but it looks awesome and that is all that really matters. It is not just the background.

The whole pokie is dressed to impress. It is a nice and minimal design, which looks clean and tidy. The reels are filled with everything that is expected atop of Mount Olympus. Everyone’s favourite gods like Zeus (the wild), Pegasus, Dios and Aetos are the high value and bonus symbols of the game. It is not just a pretty face. There are some decent feature and winnings in this pokie, the most noticeable of which sits atop the reels. 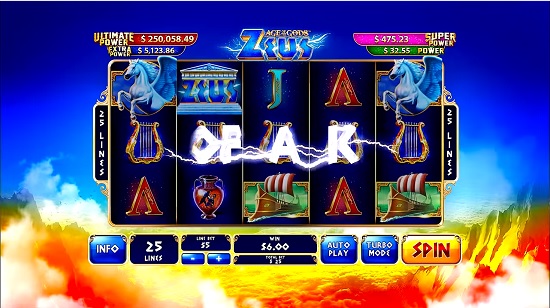 The wins are constantly changing but they remain mighty impressive, with the Ultimate Power often surpassing the $200,000 mark. All of the jackpots are won at complete random, in a game mode where you select from different coins. If you match three coins, you have won the jackpot.

There is a free spins game, which is triggered when you land 3 or more Temple of Zeus symbols, on the reels. You are then given 10 free spins, and there is an increasing multiplier, which will make for bigger wins on every subsequent spin. This can lead to astronomical wins, and it is among the most lucrative free spins features in the whole industry. The free spins feature is played at the wager, which unlocked it.

As proudly displayed on the side of the reels there are 20 paylines in this pokie. The effect that the amount of paylines will have on a game is largely determined by the symbol value, and we are not yet privy to that information. When it is closer to the game’s release, we should be able to get a sense for what the wins will pay.

There is not much not to like, in this pokie. It is not out yet, but we can tell from the promotional material, made available that this is going to be a great pokie. We are a bit weary of the apparent lack of features in the game. If it is how it is described than the free spins game will be a great feature, but there does not seem to be much else.

It looks fantastic and has a great free spins feature. We might not know much about it, but that is enough to convince us to play this game, when it comes out. Playtech are on a bit of a roll at the moment and they seem to be doing nothing but releasing good games. For these reasons we recommend that you check out this pokie, and form your own opinion.