Ace Ventura Pet Detective is a new slot developed by Playtech. It is based on the long forgotten Jim Carrey movie that goes by the same name. In the movie, Jim Carrey played the role of a private detective who specialised in animal crime. It was a comedy movie, and as you would expect, Playtech has given us a colour-filled, light-hearted game.

Ace Ventura Pet Detective, is a beautifully designed slot. Playtech have made the most of this theme, and incorporated it into every aspect of the design. For example, the colourful squares that border the reels have little chunks taken out of them that suggest Aces’ jungle friends have been nibbling on them.

It is these tinny details that all come together to make a great slot. The colours all work well together. The background is a light blue, complimented by the pink and yellow borders and offset by the white reel. There are no straight edges. The borders are cooked, as are the buttons on the panel. 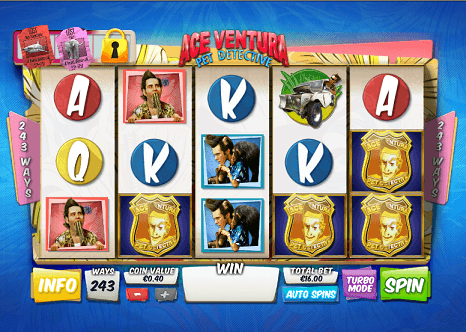 There are spaces for two and one with a padlock. You can take two Animal Modifiers, with an option to unlock a third, into the Free Spins Game. They are collected when they land anywhere on the reels. If one you have already collected lands on the reels, you are rewarded a cash prize.

There are also three in reel features which activate in base game. They are all triggered at random and make a losing streak in this game very hard to come by. Having this many Base Game features helps maintain your bankroll. In the Jungle Friends feature, Ace calls upon his jungle friends, who fly around the reels depositing wilds.

The Sneaky Walk feature, is triggered at random and it causes Ace to walk across the screen spinning reels. In The Loser feature, Ace will spin the reels at random, increasing the multiplier, each spin, until the player wins.

There is not much we can complain about this game. The symbols have low values, but this is offset by the amount of features, the 243 paylines and an impressive RTP of 97%. We really like this game and don’t have too much to report on here.

Is this game worth paying?

This game is probably the best title Playtech have released in years. It is definitely worth playing. We have and will continue to recommend this slot to anyone. It has an abundance of features, is beautifully designed and, most important, it is entertaining.