Samba Carnival is a game which is inspired by the world’s most popular festival, the one taking place in Rio de Janeiro each year. The Samba dance is the one that’s taking the front and center place during this festival, which has over 2 million people come each year to attend it. The modern graphics will place on the reels various attractive Brazilian dancers and fruits which seem ready to be used for some exotic cocktail. It is a game with few paylines, only 15 available on 5 reels, but which does quite well in offering wild symbols with big multipliers and bonus features. The big prize is at $15,625.

The game does a decent job at bringing the atmosphere from the Rio Carnival to your screen. You have the Samba dancers on the reels, dressed in the usual feather costume that you see each time the Rio Carnival comes around, and then there are the cocktail fruits with little umbrellas in them, making you think of tropical beaches. The background image shows you the sky of Rio at night, with fireworks exploding.

The other part which I enjoyed is the presence of wild symbols which have multipliers in them. Each time a wild appears, it will have a number of musical instruments in it, and that number will let you know what kind of multiplier will be applied. 2x to 5x multipliers are possible whenever wilds are present in winning combinations. A wild can replace any other regular symbol, but it doesn’t do that with the bonus icon. 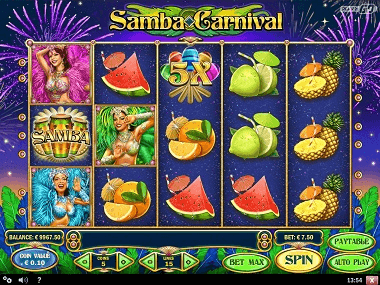 A bonus symbol is the one with the Samba logo on it and with three drums behind it. The color of the drums doesn’t seem to matter, as long as you get three bonus symbols at the same time. This will trigger a bonus feature, where you pick a symbol and in exchange you are given a prize. It can have a value of up to 150 times the bet at most.

The typical game will form combinations by landing 3+ symbols and going from the leftmost position to the right. Here, you can form them even if they’re in the middle of the payline, or if they start from the right instead of the left. It takes the sting a bit from the low number of paylines which are offered.

I didn’t enjoy the fact that only 15 lines are provided, but as you’ve read above, the developers made up for that somewhat. I also would’ve wanted more from the features of the game. The wild symbol looks good, and it’s nice that they offer a bonus game, but it’s way too simple to be fun to play through.

The game has its merits, and at least they didn’t create just another slot machine here. They made it different with the multipliers of the wilds and with the way it forms its winning combinations.