Home » New Pokies » Play for the title while spinning the reels on Bicicletas!

Play for the title while spinning the reels on Bicicletas!

Yggdrasil Gaming recently released their new football theme video pokie game Bicicletas. The release date was planned just in time for the ongoing European Championship, giving players a taste of the action from the football field on the reels of their screen. Bicicletas may not sound much like a football name to many players, but it actually means bicycle kick in Spanish. This is one of the most attractive ways to score a winning goal in a football match and those who managed to achieve that are considered as great football players.

With Bicicletas, Yggdrasil decided to use a 25 pay lines design but with an extra fourth row added instead of the classic three. With this design the minimum bet per spin size starts from $0.25 and can go up to a high $100. Not too much attention has been paid to the overall visual appearance and animations, which is a bit surprising for a company like Yggdrasil.

The bonus feature can offer more excitement, accompanied by the Trophy symbol on the last reel that can boost the overall payouts. This compensates to a certain measure for the generally weak pay table with a highest payout of only 10 x total bet. The bonus round is a classic free spins bonus triggered by 3 or more scatter symbols on the screen and with extra features added to the wild symbol.

We have to say that the bonus feature looks very interesting. We like the fact that the free spins can be triggered in two ways, by the classic minimum 3 scatters and by the Trophy symbol.

This symbol offers the most excitement in the free spins and we love the fact that he can award extra free spins, up to 1,000 coins payout or a Sticky Wild Reel. Also another great fact for the free spins is that each player symbol that lands on the reels has the potential to transform into a Sticky Wild symbol, if he manages to score a goal with the famous Bicicletas kick. 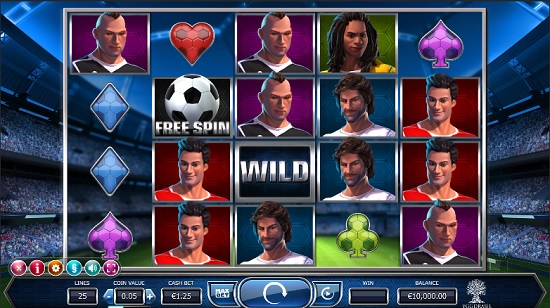 Even though we have a very high opinion about Yggdrasil software, Bicicletas has several details that we don’t really like. The visual details and effects are on a lower level than usual and overall Bicicletas doesn’t offer anything attractive at first sight.

Maybe the biggest disappointment is hidden in the symbols payout, as the highest possible win on a pay line is only 250 coins or a small 10x total bet. This way the overall payouts are small to medium and very rarely big.

We saw and tested a big number of new football theme video pokie games the past month and none really caught our attention. The same rule applies to Bicicletas, but we can say that from the entire mentioned collection it seems as the best game to play.

You will need a lot of luck to score big in the bonus round. Many details have to come in place, like several sticky wilds from the player symbols, a few extra free spins from the Trophy symbol and maybe the most important a Sticky Wild Reel. If everything matches a big win is possible even over 500 x bet, but it is up to you to decide whether the potential prize is worth the overall risk.