Witch Pickings is a new pokie, developed by NextGen Gaming. It is themed around three cheerful witches. The pokie saturates a set of reels in colour. They have included lot of fantasy in this game, there is a cobblestone path winding through a field towards a castle. NextGen Gaming is a veteran of the industry. They have been developing games since 1999 and merged with NYX interactive to form the NYX Gaming group, in 2011. They have released over 600 games and most of them have been quality titles.

Witch Pickings is a well-designed game. As far as, aesthetics are concerned NextGen have made a cracker of a game. It is lovely, bright, and colourful. The background image builds on the theme and is nice to look at. It all works well together. The symbols are animated to move about when paylines are made, and it is these subtleties, which tie a game together, visually. The Spin Button is in a mushroom, and the rest of the panel designed specifically for the game. This is important to us, as we hate when game developers recycle a panel, as they often do not agree with the theme.

The gameplay is great. Witch Pickings has high symbol values, and this means frequent wins above your wager. We found this to be a medium to high variance game. The real winnings are definitely in the free spins feature. It is a lucrative feature, with many features inside it, to differentiate it from base gameplay. These features vary, as you select them before the free spins begin. You are given 5 free spins, when 3 scatter symbols land anywhere on the reels.

The three Witches stand in front of the reels, looking all sassy, and pink smoke fills the screen. You are then taken to another screen, where you choose a bonus from each witch. There are three witches. Therefor you take three bonuses into the free spins. It all sounds terribly confusing, but what you end up with is a free spins game, with a variety of features, to add to your winnings. 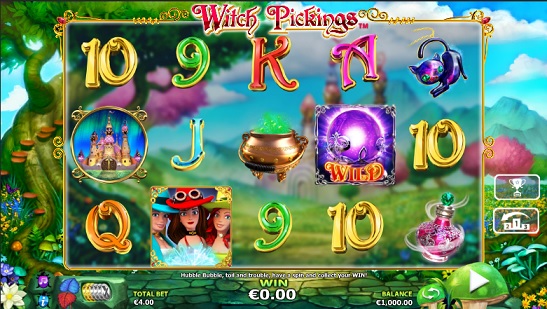 They are common features, think multiplying or stacked wilds, substituting symbols and more free spins. A list of all the features, is available in the Paytable. It is a great feature, which we won big it. There is a degree of strategy involved in choosing your features, and you have to think, what would work well together, to increase your winnings.

The other feature is a gamble feature. It is the generic, guess the value of this face down card, ordeal. Correctly guessing the colour will multiply your win by 2, and if you guess the suit, it is multiplied by 4.

This feature will have you cheering or banging your head against a wall. We like to gamble our wins below bet, because we figure that they are already losses why not. The Gamble Feature can put your bankroll on a slippery slope. Tread carefully, and know when to take the money and run.

This game could do with an extra feature or two. Although the free spins, feature has many features within it, it is still just a free spins game, and the gameplay is near identical to that of the base game. We would like another feature to mix up the gameplay a little, and keep us interested.

We like this game. It is pretty to look at and fun to play. There is the added bonus of a very lucrative free spins game, and big winning potential. We think this is one of the better games, which NextGen have made in a while and recommend it whole heartedly.