NextGen Gaming decided to launch another 1,024 ways to win video pokie game, increasing their offer of video pokies with a similar design. They already have a very big collection of video pokie games with various designs and themes, so Monster Wins is their latest monster game.

Like in many other pokies in the industry, the monster symbols in this game have a cartoon design, with cute animations and adorable background music. Even the biggest monster of them all, Boss, isn’t as scary as we expected it to be. Almost everything in the game revolves around the Boss, making him a rather egocentric figure.

The usually most sought out symbols, Wild and Scatter, are set aside with miniscule functions and extra features. The scatter has a small 50 x total bet payout, for 5 of them on the reels and triggers the Monster Free Spins feature when 3 or more of them land on the screen in any position.

The wild on the other hand lands only on reels 2, 3, 4 and 5, substituting for all symbols, except the scatter, with no extra features attached. As we said all features in Monster Wins are designed around the Boss, starting with the Unleash the Boss Monster, triggered when this symbol covers the entire 4 positions in the first reel.

All Boss symbols that are on the screen at this moment are held in place with blue tentacles grabbing the reels and awarding extra Boss symbols. This can form several reels or a full screen with Boss Monster symbols and a high 500x total bet payout. The free spins don’t offer any novelties, since only 3 free spins are awarded with the chance for a retrigger, making this feature a 3 times repetition of Unleash the Boss Monster feature.

Generally speaking you can’t find many details in Monster Wins to attract you into investing money and chasing some serious payout.  The theme and visual appearance are ok, but from there on it’s all downhill. 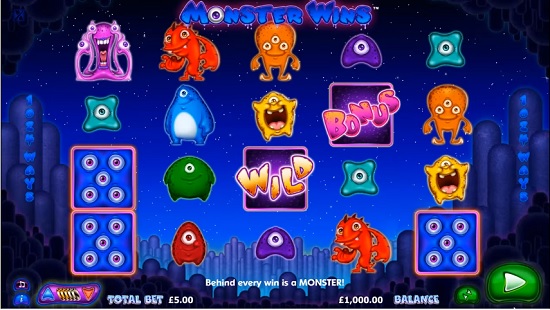 Everyone will agree that the provided features and symbols payout are simply terrible and not worthy of wasting your time and money.

With only 3 free spins of an identical feature as in base play and impossible to win several Boss Monster reels, Monster Wins has one of the worst payouts from all NextGen pokies we’ve seen so far.

If you are an experienced player and have had the chance to spin the reels on other 1,024 ways to win pokies from NextGen, you already know that Monster Wins isn’t worth playing.

There is a very small chance that you might actually have one or more big wins of 500x total bet, but the overall small payouts and the high $0.50 minimum bet, cannot compensate for your losses along the way.

With several Unleash the Boss Monster and Free Spins features triggered, we never saw a win over 50 x total bet or several full reels of the Boss symbols. Even as a mid to high variance, Monster Wins is better named Monster Eats because that is precisely what it will do to your bankroll.