Drive Multiplier Mayhem, is a new slot from the Swedish powerhouse that is Net Entertainment. They live to please, or at least we get the impression they do, having played this game. It is set in the glow of a city skyline. A street racing subculture, has immerged complete with, tuned cars and sketchy looking racers. It is being released the 23rd of February, and is available for free play at some casinos.

The thing about Net Entertainment is they make the best games. They are visually stunning games, with great Jackpots and original features. There are exceptions to every rule, but for the most part, when Net Entertainment brings out a new game, we are going to enjoy it.

Drive Multiplier Mayhem is so named, because of the Multiplying Wilds that inhabit the reels. The first reel has a conventional Wild with no multiplier. But as you move from left to right the multiplication of the Wilds increases. The second reel has a 2x multiplier the third reel has a 3x multiplier and so on, until you reach the 5x times multiplier on the fifth reel.

The Wilds will substitute any symbol in the game, to make the highest available winning payline. So you can imagine, how having them multiply the value of that payline would be advantageous. What’s more is that, Wilds also multiply other Wilds. If you land a 4x multiplier in the fourth reel and a 5x multiplier in the fifth, then assuming this is linked to a payline, your win will be subject to a 20x multiplier. 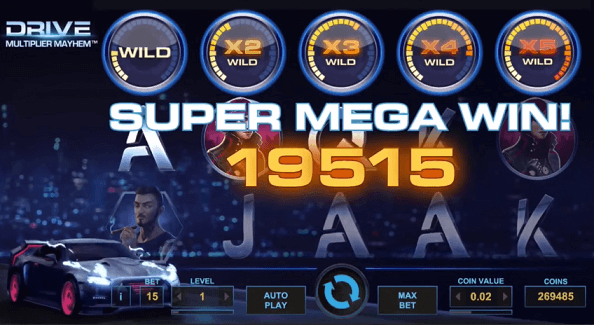 These Wilds are surprisingly common, considering the amount of value they add to your wins. They are responsible for the games massive winning potential. If you throw a twist of miracle at the reels and manage to land the highest value symbol, followed by four multipliers, you stand to win 1200x stake. This is a phenomenal Jackpot.

Even if you are not putting down the highest symbol and straight Wilds, this game will win big, and win big often. The symbols have high values, which we did not expect from a game with Multiplying Wilds. And this means that you are not dependant on the Wilds to win.

If we are to talk briefly about the aesthetics of the game, it would be to mention that they are raising the bar for slot developers everywhere. The graphics are outstanding and the animations beautiful. The game has a moving background, which always goes a long way towards developing a pretty game. And the Free Spins Game has a different layout to the Base Game, which works well, to differentiate the two.

The Free Spins Game, is designed around a drag race. As mentioned earlier, it has a different background to the Base Game. The cityscape background is replaced by a fast moving road, and to the left of the reels your opponent’s car races, alongside you. The interface is bordered by a dashboard and windscreen. You race three other characters in the game and winning the race moves you up the pecking order to another race, with more free spins. In the Free Spins Game, there are more Multiplying Wilds on the reels, which raise the Jackpot to 5,109x stake. Races are won by landing three or more Nitro Symbols, on the reels.

We could not find much to fault in this game. Net Entertainment, is in the nasty habit of putting a Max Bet button right next to the Spin Button.

We are by no stretch of the imagination surgeons, but found that we accidently press the Max Bet Button a few times. The button also spins the reels, so there is no chance to redeem your mistake, if you do happen to click it. We advise caution, but think that this is not a big issue, you just need to be a little careful.

Drive Multiplier Mayhem is a great game. It is everything you can ask for in a slot and more. Net Entertainment have done what is needed, to make this slot great. And we know that this sounds a little bit used car salesman, but it really is a great game. We would recommend it to anyone.