Win Sum Dim Sum is a new game from Microgaming. This game developer cannot get enough of the orient and has released a lot of Chinese themed games, recently. Win Sum Dim Sum is based specifically around Chinese food, and Dim Sums. The reels serve up dishes from a Chinese restaurant, in traditional Dim Sum bowls.

Win Sum Dim Sum has high symbol values, and it will sustain a player’s bankroll. We like the free spins feature. It is triggered by landing three or more scatters anywhere on the reels, and gives you 15 free spins to do with as you please. The feature has some slight variations from the base game, which increase your winning, which is what we expect in a good free spins game.

There is a 3x multiplier applied to all the wins, which you make in the feature. The expanding wilds feature, from the base game is also used, except in the free spins game, it expands on all three middle reels. In the base game, the expanding wild symbol expands to cover an entire reel, the third one. It will substitute any symbol except the scatter to make a win.

We like the winning potential, in the pokie. In just the base game, there is an impress 1,222x stake winnable. Granted this is not the best jackpot, we would consider it a middle of the range figure from Microgaming, but it is hard to say nice things about this game. 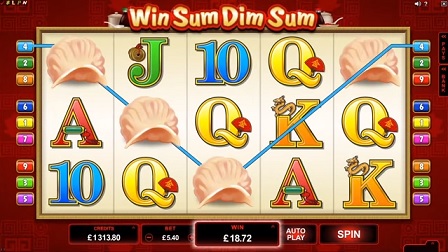 This pokie is ugly. It has dated graphics and Microgaming have done very little to differentiate this pokie visually. It is a clone of another Microgaming pokie, SunTide, and has identical gameplay. Because that pokie is also in a similar visual state, we cannot help but think that these are filler titles.

They seem like games that they put out, just to keep the profits coming in, while they work on something else. With their new pokie Bar Bar Black Sheep being released soon, we think that Win Sum Dim Sum did not get the attention that is needed to make it a good game. The background image is just a red tablecloth, we get the Chinese restaurant colour of luck thing, but what you end up with is a pokie with a boring monochrome background.

It has only nine paylines, which is not a bad as it first seem because it is a 5×3 pokie. We don’t really like 5×3 pokies, and this is a personal preference but we know it is one shared by many. They don’t look as good, and they have less paylines.

Using an expanding wild feature on a 5×3 pokie is also a bit sneaky, as it will not work as well, as it would on a 5×4 pokie, because there are less symbols to substitute. Then Microgaming went and made it so that the expanding wild symbol only lands on the third reel. This has made the symbol worthless, except for in the free spins feature, where it works really well.

It is not really worth playing, and we recommend that you give this game a miss. Microgaming does not deserve your coin for producing this mediocre title. Wait for them to put out a decent game, and play some others, in the meantime. We recommend Bikini Party; it is a new pokie from Microgaming, with some good features. Alternatively, you can wait for their Bar Bar Black Sheep pokie, which looks like it will be a great title.