The Wild Orient is a new pokie developed by Microgaming. It is themed around the jungles of Asia and all the animals that live amongst it. It is a reskinned version of Dragon Dance and Bikini Part, two games Microgaming released recently.

It is a nicely themed and designed game. Microgaming has not done too much for the aesthetics but what they have done, is done well. We like that the paylines are not ugly lines drawn through the pokie.

Instead, all the picture symbols are animated to move. The background is a picture of a bamboo jungle and all the symbol pictures are of the animals, which live amongst it. This all conforms with the theme. We like that there are 243 ways to win. It means that you can land a matching symbol anywhere on an adjacent reel and it will still count, towards making a payline. 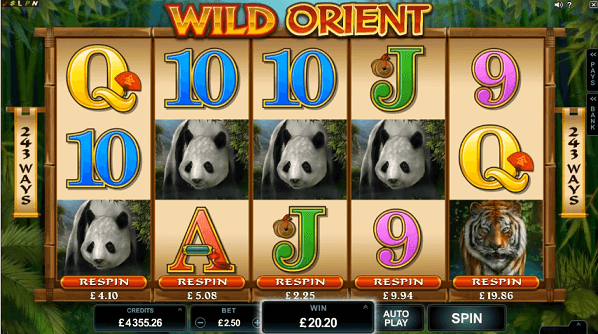 It really takes the guessing out of what is and is not a win. It also means that you are always winning. The symbols have high values, and the player will consistently win above wager. We found this game had a medium variance, and sustained our bankroll.

We like the reel respin feature, in this game. Microgaming have released a few games with this feature, and we have grown to like it. Our first reactions, was one of why are they making us bet more to use the games main feature.

And there is a variable cost associated with using the feature. It is determined by the likelihood of you winning the respin. However, we found that the wins we won by using the feature, often outweighed the cost. You can respin a five in a row win four times, and win every time. It takes guts and a bit of a bankroll. We found the feature, more lucrative than the base game.

The Wild Orient has some decent winnings tucked away in its jungle. There is a 160x stake to be won in the base game, which is of course 480x stake in the free spins feature. We think that these are decent winnings. There are pokie games that offer bigger winnings, but this is not a bad a jackpot.

There is not much, we do not like in this pokie. It would be nice to have another feature. The free spins game is nice, but it is very similar to the base game. And the reel respin feature has a cost. I guess that because there is a cost, we felt like Microgaming owed us another free feature.

Is it worth playing?

The Wild Orient is worth playing. If you have been playing the other new Microgaming games, with the same gameplay, then it makes sense to switch over for something different.

I know that is what we are doing. It is a good game with some great features, and it looks nice. The reel respin feature, is a good feature that can be just as lucrative as spinning all the reels. This game does a lot right and we think players will enjoy it. We recommend this game to all pokie players.