Released on the 16th of December 2015, by Lightning Box, the Pixie Gold pokies game does some things differently. The Lightning Box, a company founded by David little and Peter Causley who claim to each have 20+ years of math focused slot game design experience. And have designed the math models behind some of Aristocrat and IGT’s top performing games.

They have created an enchanted forest type pokies game. The interface is a wooden colour framed by trees, and there is all kinds of mythical kicks to be had. The symbols are toadstools, elfin creatures, lady bugs, acorns and elfin letters.

Lightning Box is not the biggest of developers and their titles have been hard to find in the past. This will likely change as the company has signed some paper work which will see their games distributed over the NYX Gaming Platforms. Player can expect to see this developer’s newer and older titles poping up all over the place.

The first thing a player will notice about Pixie Gold, is that it appears to be an 8 reel slot. There are four large reels in the middle of the game and, four smaller reels, two of to each side. What will bend the mind, and bring into question all you held true, is that these four middle reels are actually one big reel, with 16 symbols.

To further the confusion, the two smaller reels on either side are the main reels. They call this the Reelfecta reel and it makes the pokies game interesting to say the least. At first it makes the game confusing and disorientating but as the player comes to terms with the new layout a paradigm shift occurs, and you get it, but are still left wondering why. 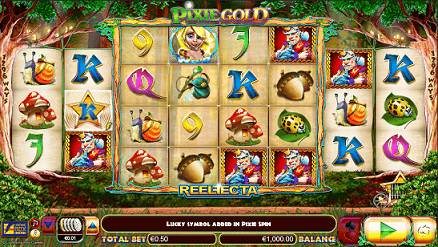 The Reelfecta reel creates a whopping 1296 ways to win, and this does and an element of excitement to the game. If the wining symbol appears anywhere on the Reelfecta reel it is counted. This player might just be stuck in his ways and prefer the tried and tested pokies machine, but it just seemed like a very complicated way to go about a very simple thing.

Once you’ve got it, it is understood and the game is great. But there are better ways to differentiate your game, such as great graphics, which this game does not have. There are a lot of things which could be improved on this pokies game, before sticking a giant super reel in the middle of it.

A great feature the game includes is a gamble option. The player can choose to gamble any win by selecting a card. If the colour of the card is the same, winnings are double, if the suite of the card is the same, winnings are quadrupled. The player can keep gambling until they guess incorrectly, at which point all their winnings are taken, away from them. This is a nerve racking way to make or lose a lot of money, and it gets the blood flowing.

Give this game a go, you might love it. First impressions matter, and this game did not make a good one. But we are all different people and the fundamentals of a good pokies game are there, multiple ways to win, free spins and a nerve racking gamble feature.

The beginning will require some persistence to understand the layout of the game, and the music will drive you insane. It is an interesting concept and we must respect developers who push the limits of what has and can be done.