Bikini Party is a new pokies developed by Microgaming. It takes place on the beach. The reels are strung up between a couple bamboo poles, to serve as the net for a volleyball game.The beach volleyball players are beautiful, skimpily dressed woman. Microgaming knows their target market. They have gone to great lengths, to make this pokies sexy.

Bikini Party is a well-designed pokies that has captured the spirit of beach volleyball. This pokies has identical gameplay to Dragon Dance another new release of Microgaming’s, but is much more fun to play. This is all down to aesthetics.

The bright, colourful feel, which this game radiates, makes it a better pokies. There are some great animations, which play out in the symbols, when you make winning paylines. They have not used traditional paylines in this game, but have used animated symbols to replace the boring line, drawn through winning combinations. Most of the games animations are to do with the girls. The intro sequence of the game introduces the girls to you, as they are slide across the screen. 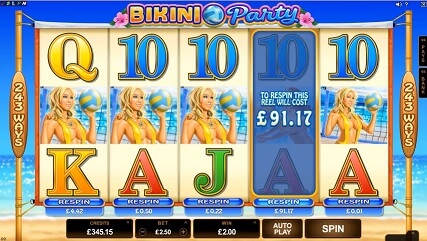 We like this games features. Bikini Party gives you the option to respin a single reel after they all have stopped. There is a variable bet, that has to be wagered to spin the reel, but it will pay any win you make. The likelihood of you winning determines the cost for this feature. If you can potentially win big by respinning the reel, it costs more to spin.

You can respin a reel as many times as you would like. It can be more lucrative, to respin, repeatedly, for a five of kind win than to spin the reels. We like the free spins feature. Bikini Party will give you 15 free spins, if you can land three scatters on the reels. The Scatter Symbol is the Volleyball Symbol. Scatter wins, are multiplied by the bet stake, so they win big at maximum stake. The free spins feature has a 3x multiplier which we found made it easy to walk away with some serious winnings.

It is even better if you are high rolling, because free spins are played at the bet that triggered them. We like that there are 243 ways to win, it takes all the guesswork out what is and is not a win. In a pokies with 243 paylines, a matching symbol is counted as a win, if it lands anywhere on the adjacent reel.

Bikini Party is a great game, but there are things that we think Microgaming could have done better. The symbols have poorly distributed values.

The lower value wins, like your three and four of a kind wins, are worthless, compared to the heavily weighted five in a row wins. This makes you dependent on getting five in rows, which is not that bad if you plan to respin some reels. It does result in an erratic bankroll, which goes a long way down, before a five in a row win, brings it back up.

It is. Bikini Party is one of Microgaming’s better titles. It has some great features. Although respinning the reels has a cost, it is still a worthwhile feature. Respinning five in a row wins, is more lucrative than playing the actual game, if you have the bankroll for it.

The three times multiplier, meant that we always won big in the free spins game. This pokies is worth your time and money. We would also recommend that you try the new Microgaming title Dragon Dance. It has identical gameplay to this pokies, with an oriental theme.