Bar Bar Black Sheep is a new pokie developed by Microgaming. It is themed around the nursery rhyme ‘Bar Bar Black Sheep Have You Any Wool…’ and is an adult take on the age-old children’s nursery rhyme. Microgaming is a veteran of the online pokie industry. They are one of the oldest developers, whose claim to fame, is that they released the first online casino in 1994.

Bar Bar Black Sheep in an attractive game with a bright colour scheme. We really like how this pokie looks, and how it has been designed. The background image is of a cheerful farm, as far as we are aware the nursery rhyme did not mention a farm, so either the black sheep is visiting Old Macdonald, or Microgaming through a bunch of sheep stuff together and made a lovely home for this sheep. It is the later, and behind the reels is a cartoony sheep paradise.

The graphics are nice and crisp, which gives the pokie a modern appearance and it there are some clever animations to tie it all together. We how the theme has been included in the gameplay and that line from the rhyme unlock the game’s bonuses.

Two Bar Symbols and a Black Sheep Symbol trigger The Bar Bar Black Sheep bonus. Although a clever the original idea, belongs to an older pokie, with the same theme, also developer by Microgaming. They reinvented it with a completely new design. 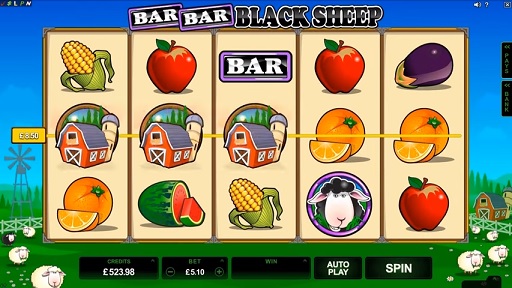 When the bonus is triggered a set of white reels, will pop onto the screen. They spin and then multiply by a number from 111 to 999. This is a very lucrative feature, and it is ok to scream like a girl when you get it, because it is kind of a big deal.

There is also a free spins feature, which you get to play when you land three bags of wool anywhere on the reels. You are given ten free spins to make bank, which is not that many but it will not take many spins to win big. There are more of the Bar and Black Sheep symbols making it more likely, that you will land the game’s other feature. There is a three times multiplier for all wins in the free spin mode.

With features like that it is not hard to understand the games massive winning potential, and guess where is comes from. Microgaming insists that there is a massive £95,000 top prize. At a guess, the Bar Bar Black Sheep feature in the free spins game would point you in the right direction to winning that.

This game could do with a few paylines. But then again it has quite high symbol value, so this does not affect too much on the game. There is not much bad we can say about this game. It is a quality title.

This game is worth playing. It is probably the best game, which Microgaming has released this year. It looks great, plays great and wins great, which is all we can really ask for in a game. We recommend this title, for all the reasons listed above.