Home » New Pokies » May the luck be with you on the reels of Charms and Clovers!

May the luck be with you on the reels of Charms and Clovers!

Betsoft Gaming has long announced the release of their new video pokie game Charms and Clovers and now we finally have a chance to try it out for real play. At first we didn’t have some high expectations for this new pokie, as it follows a very common and overused theme in the online gaming industry. With so many Irish themed video pokie games online from almost every software provider it is almost impossible to attract players with something that hasn’t been seen before.

But Betsoft Gaming is one of the pioneers in this industry and they most definitely are pioneers when it comes to online 3D video pokie games, so we can freely say they managed to pull off the impossible.

They managed to create an exquisite Irish themed video pokie game, which is different than any other both on a visual level and features likewise. The designers managed to create excellent 3D animations, accompanied by high detailed symbols and a unique game play.

A real novelty in Betsoft Gaming is the extra sixth reel, which can create six of a kind payouts but is also the place where all the magic happens.

Like we said the visual effects on Charms and Clovers are outstanding. The animations and symbol details are on a very high level, but we especially love the leprechaun animation by the reels and the green forest background. We also like the way the bonus features are triggered and we love that there are 4 different features to be won. 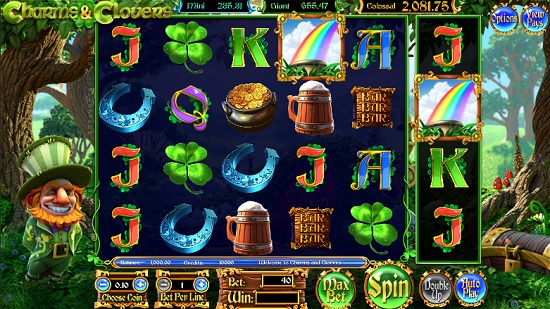 As each of the Money Wheel, Mega Symbol, Golden Bonus or Pots of Gold symbol covers the entire last sixth reel the corresponding bonus is triggered. We like that you can win cash prizes, multipliers or even one of the jackpots, but our top choices are the 2 free spins modes.

We can’t decide which feature is better as both award 8 free spins, where the Mega Symbol bonus can award extra Mega Leprechaun symbols the size of a 3×3 grid, while the Pots of Gold can award up to 3 extra wilds in each spin. Both features are great and have the potential to pay big.

Everything in Charms and Clovers is great and on a top level. The visual effects, the bonus features are all top notch and there is nothing we would like to change here.

Still there are two details which are common to all Betsoft pokies that we don’t like. The minimum coin denomination is set at 0.02 doubling the minimum bet per spin size to $0.80 instead of the normal $0.40 and the progressive jackpot can only be won while playing on maximum bet.

Sure, Charms and Clovers is worth playing as it’s not your regular Irish themed pokie game. The visual appearance is outstanding and the extra added reel makes the game play more interesting.

You can win some great payouts during the free spins features and you have a chance to trigger the progressive jackpot if you are a high roller and like hitting the Max Bet button.