Isle O’ Plenty is a new pokie developed by IGT. It is themed around the luck of the Irish, and set in a clover field. Set in a clover field, with a cloudy sky overhead this game is pretty Irish, and we know what we will be playing, this coming Saint Patrick’s day. International Gaming Technology are an American company, who began producing land based pokie machines. They have over 50 years of experience in the gaming business, but it wasn’t until 2005 that they developed their first pokie games.

Isle O’ Plenty has a nice theme and design. It is by no means a new theme; the luck of the Irish has been reworked every which way. None the less, they have done a good job of it and created a nice looking pokie. We like that this game has 40 paylines, this should keep things interesting and the wins frequent.

Talking about wins, this game is the third and most recent title in IGT’s Megajackpot series. There is a progressive jackpot climbing towards life changing winnings on the side of the screen. That is always going to be a big incentive to play a game, a jackpot that would get you on the news and maybe a Wikipedia article. They have not let the title slip either, which we sometimes find with games that have big progressive jackpots.

The developer thinks that the rest of the game is not important. IGT have still included all the things that make a good game. The jackpot can be won on any spin and it is won by landing the Jackpot Symbol, on every column in the middle reel. This can be done in the base or free spins games. There is a second chance feature, which will respin the reels until a win is made, which can also win the Jackpot. 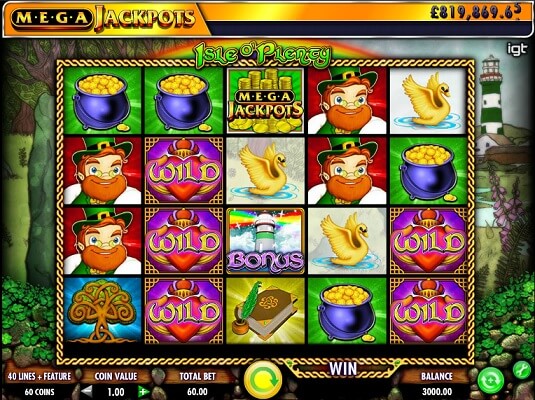 Isle O’ Plenty has a free spins mode, which in triggered by landing the bonus symbol. The minimum amount of symbols required to unlock the game mode is 2, but you are further rewarded, with more free spins for landing more symbols.

The game will give you 4, 6 or 12 free spins. The game mode is nearly identical to the base game, except there is a feature called Leprechaun Magic, which enchants wilds onto the top of the reels, and makes a lot of winning paylines. The Wild Rush feature will increase the amount of wilds in this game. This game is very wild focused so if they are one of your favourite features then expect to like this game.

The graphics are not the freshest to ever bless an online pokie game. It is not an ugly game, and we think that the design works nicely, but IGT could have tried a little harder to give it a more current design. There are not enough animations, and had the paylines, been replaced with animation we think that would have worked well.

This game was worth playing the second we heard Megajackpot. This progressive jackpot is what dreams are made off, and it has holiday to Fiji written all over it.

The game developers have also built a quality base game, and included some exceptional features. We recommend this game. The graphics are not that swish but the get the job done, and we still think this is a great game.