Nordic Heroes is a new slot, developed by IGT. International Game Technology, are an American slot developer, who have been around forever. The company was founded in 2005, which makes them one of the longest serving online slot developers.

They are an absolute giant, manufacturing roughly half the land based slot machines in the United States. Their online presence, while substantial is a little tainted. They make good games in respect to the RTPs and features. But IGT are in the nasty habit, of churning out ugly game, or identical ones, rebranded with a new skin.

Nordic Heroes, has console style gameplay. What we mean by this, is that IGT have included a level system. You can level up characters by defeating monsters. As you further upgrade your character, you better them, making it easier to beat monsters. A game which wins more the longer you play is far to enticing a prospect for us to not like. That in not all the can be unlocked. The player can unlock different realms, character and having a higher level triggers better multipliers. 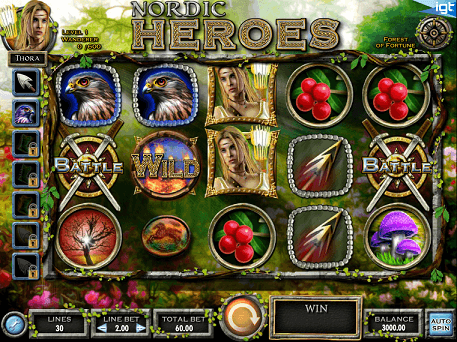 Defeating all three monsters unlocks victory spins. You can earn 1, 2, 5, or 10 Victory Spins. The number of Victory Spins depends on the character, the realm, and the number of spins it took to defeat the third monster. There is too much information to retain, in relation to all the things that EX points do in this game, but IGT have included thorough instructions.

There is a Mystery Multiplier Feature, which will randomly trigger, multiplying any win that does not also trigger the Battle Bonus. The level of the character you are playing with, will determine the multiplier. Each level has a range of multipliable values assigned to it. There is more information about this in the instructional information, but put simply, if you have a higher level your score will be multiplied by a higher number.

Nordic Heroes is an ugly game. It looks disorganised and, antiquated. IGT games are known to suffer from these conditions, and when playing a game like this you need to consider if you play a game for the graphic, the features or something in-between. This game is quite confusing.

All of the bonus feature that IGT have added are not without their cons. It is impossible, to keep track of all the things that are happening. But we found that although, we were not 100% sure what all the little upgrades meant, if we kept spinning the reels, it all worked out.

This game only has the option to change the amount of bet lines. We much prefer when the bet can be raised or lowered, and you still retain all the winning lines. Nordic Heroes only had 30 paylines to start with, so if you are not betting max, there are not many ways to win.

We think this game is worth playing. It is not the prettiest of titles, but it had more than enough features to keep us entertained. The EX points, make the game interesting, and entice you to play for longer.

It is also jam packed with multipliers. It is a well themed game, and the theme has been incorporated into all aspects of gameplay. The game is let down by its aesthetics, which are not the polished graphical excellence that we have come to expect from online slots.