Clash of Queens is a new pokie, developed by Genesis Gaming. It is set in a fantasy word, with a dark and mysterious colour scheme. This is a fairy tale pokie, with an adult theme. This pokie is loosely themed around Through the Looking Glass and Alice in Wonderland, by Lewis Carroll, a book that taught us fairy tales are not just for children.

Genesis Gaming is one of the newer developers of online pokie. They release regular titles, but do not get the same exposure for their great games as other developers. We think their past titles have been exceptional as far as graphics and the visual aspects are concerned.

Clash of Queens has great gameplay with frequent wins above wager. There are high symbol values, and a modest amount of paylines. This all translates to a game, which can keep a bankroll steady. There are not many big wins, in the base game, but another great thing about this game, is its bonus games. The base game will keep your bankroll steady, and you can just spin the reels waiting out for a bonus game.

The bonus games are based around the theme. You unlock a game mode called the Clash of Queens Battle feature, by landing a Red Queen symbol and a White Queen symbol on opposing reels. If we confused you, what we are trying to say is that, the bonus game is triggered when you land the White Queen in the first reel and the Red Queen in the fifth, or vice versa. It is a clever idea and we like the concept that the queens battle when they are equal on the reels.

The Clash of Queens Battle feature is an animation that effects the proceeding game modes. Before the clash, you choose between the two queen’s crowns. This determines which bonus game you will play, regardless of the outcome of the clash. The queens battle on a chessboard. It is a well put together cinematic experience, and they trade blows of magical lightening as they move about. The can only be one winner and if the queen you choose won, then she helps you along in the following features. 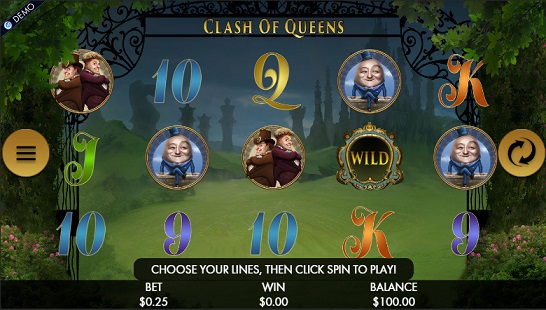 The Red Queen’s feature is a free spins mode. It is played at the value of the bet, which unlocked it. You are given 4 or 8 free spins. If the Red Queen won the clash, you get eight and if she lost, you get four. In the free spins, the Red Queen magic expanding wilds to cover entire reels. It makes this a very lucrative feature, and you should expect to win big.

The White Queens feature is a pick and choose game mode. You click on chess pieces to unearth the winnings they conceal, and continue to do so until you select the piece, which reveals the select at which point the game ends. If the White Queen won the clash, there is a 4x multiplier for all winnings.

This is a good game and consequently, there is little to say about this section. We do not like the parallax effect. It is a visual effect, which moves the background when you move the cursor around.

It is a little pointless and it borders on the disorientating. There are not many big wins outside of the bonus games. The base game has enough wins, to keep your bankroll steady, but we found it low various game play, unless we unlocked the bonus features.

Clash of Queens is a great game. Our only critic of it is you have to unlock the bonus games, before you can win anything substantial, and the base game is low variance.

As far as graphics and aesthetics are concerned, it is an exceptional game. We really liked the bonus features; they have a clever use of the theme behind them, and are very lucrative. Overall, this is a great game and we recommend it.